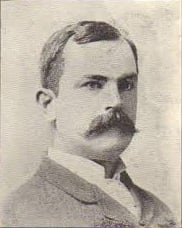 Albert Parlin was born on September 16, 1848 in Everett, Massachusetts to Ezra Parlin and Nancy Pickering-Parlin. His father, Ezra, was a native of Weld, Maine who met Nancy while he was teaching. Unfortunately, tragedy struck in the young life of Albert, losing both his parents at a very young age – his mother passed in 1853 at the age of twenty-six and his father passed in 1858 at the age of thirty-seven, both succumbing to “consumption” (tuberculosis). At the age of nine, young Albert had become an orphan, raised by his grandmother, Sarah Howe Edmester Pickering, in the Pickering House where he was born.

Never deterred, Albert pushed forward with his life, gradating from the Schools of Malden and Malden High School in 1864. He found his first job as a floor-sweep and errand boy in a retail cloak store, serving the store for eight months. Come July, 1865, the seventeen-year-old Albert Parlin began working with Magee Furnace Company, a Boston-based company where Mr. Parlin spent twenty-eight years of his professional career. Ten years into his tenure, Mr. Parlin rose through the ranks, taking charge of the company in 1875 and becoming the company’s Treasurer in 1876. While working at Magee, Parlin connected himself to many prominent business enterprises: He served as the President of the Chicago and Ohio River Railroad, Director of the Connotton Valley Railroad, Director of the Hamilton National Bank, and Director of the New England Mortgage Security Company.

In 1892, Albert Parlin donated to the City of Everett the Pickering Estate, his birthplace and familial home, to be torn down and a Library erected on the parcel in memory of his son, Frederick E. Parlin, who died in 1890 at the age of eighteen. Albert Parlin gave to the City an additional $5,000 to aid in the building of the Frederick E. Parlin Memorial Library. Through the years, Mr. Parlin continued to exemplify charitable giving, donating $6,000 in 1911 for an addition to the Library, purchasing the land between the Library and Central Fire Station to serve as an outdoor relaxation area for the residents of Everett, and donating first-edition books and portraits he had amassed over the years. His greatest gift given to the Library came in the form of the Frederick E. Parlin Memorial Fund. Between 1924 and 1927, Albert Parlin donated $100,000 to this fund, the interest from which the Library could use to purchase items not provided to the Library by the City. This fund is still used by the Library Board of Trustees today.

Albert Parlin did not stop his generosity with the Library; it takes more than that to be known as “Everett’s Greatest Benefactor”!

In 1914, Mr. Parlin donated the land on which the Parlin Junior High School currently resides, noting in his donation that he wished for a school and playground to be maintained on the parcel. In Mr. Parlin’s will, Albert Parlin left $300,000 “to purchase or erect and maintain in or near the City of Boston a lodging house…where, at a small expense, poor and worthy young men and boys, who are earning their living, may be offered a healthy, attractive home in good surroundings to enable them to start right in the world, and to afford them a congenial place to spend their evenings…” The Parlin House, as it is now known, stands directly behind Everett City Hall. When it first opened, the Parlin House, which had both a full gymnasium and a swimming pool in addition to its living quarters, charged occupants $4.00 per week (which translates to roughly $60.00/week in today’s currency – not too bad for Everett rent!)

Albert Parlin truly embodied the word “generous” in every sense, creating a legacy that has lasted over a century and will continue to provide for the residents of Everett well into the future. Mr. Parlin passed away on March 15, 1927 at the age of 78 and is buried alongside his wife, Sarah Battelle Emmons Parlin, in Everett’s Woodlawn Cemetery.