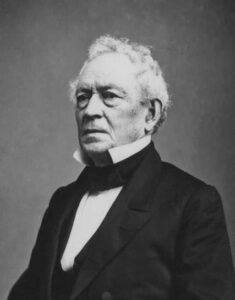 For the inaugural highlight in our “More than a Name” series, the most fitting figure is the namesake of our City, Edward Everett.

Born in 1794 in Dorchester, MA, Edward Everett served many prominent roles throughout his life, including Member of U.S. House of Representatives from MA’s 4th District, U.S. Minister to the United Kingdom, Governor of MA, Secretary of State, U.S. Senator from MA, and President of Harvard University.

Despite his political prominence, Everett was most notable for his skill as an orator. In fact, Everett was the featured orator at the dedication ceremony of the Gettysburg National Cemetery in 1863, where he spoke for over two hours. What happened immediately after Everett’s speech? President Abraham Lincoln delivered the Gettysburg Address, one of our nation’s most recognizable and most significant speeches.

In 1870, Everett, MA separated from Malden, bearing the name “Everett” in honor of one of the greatest orators in our nation’s history and prominent political figure during a highly divisive time in the United States, Edward Everett.