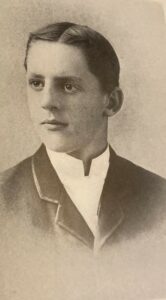 The first Everett Public Library was opened to the public on May 1, 1879, situated in the Whittier-Dearborn Building at 166 School Street. As the collections of the Everett Public Library expanded, so too did the space requirements and, subsequently, the operating costs. Noting the struggles of the existing library and anticipating the population growth that would occur when Everett was to change from a town to a city, Albert Parlin offered to gift to the then-town of Everett his grandparents’ estate, the Pickering house, as well as a sum of $5,000 to erect a new library in memory of his son. On September 17, 1895, the Frederick E. Parlin Memorial Library was opened to the public.
Frederick E. Parlin was Albert’s only son, who died on August 20, 1890 from Typhoid Fever at the young age of eighteen. Over the course of his short life, Frederick exhibited athletic prowess, high levels of intelligence, and was highly regarded by all who knew him for his personality and character. Frederick won back-to-back gold medals in 1889 and 1890 for finishing in first-place in a one-mile bicycle race. He took and passed the entrance examinations for Harvard University after excelling academically at the Chauncey-Hall School in Boston. He was the object of adoration by his parents, described as “a young man of rare personality and great promise.”
M. Grant Daniell, Frederick’s teacher at Chauncey-Hall, reflected on young Frederick after his untimely death: “Fred Parlin, as a pupil in this school was distinguished first of all for unswerving fidelity to his school duties. He was conscientious to a fault. What he had to do he always did to the best of his ability…His was a very amiable disposition. Teachers and school-mates were fond of him. His conduct was as nearly faultless as one could wish. He did right because it came natural to him to do right. He was thoroughly incapable of doing a mean act…I am aware that the above is a meagre and inadequate estimate of the boy’s character and personality, but such as it is, it comes from one whose heart is still warm with pleasant and tender recollections of one of the best fellows it has ever been his lot to come in contact with.”
Although Frederick was stripped of a full life, it is a privilege to honor his legacy here at the Parlin Memorial Library.