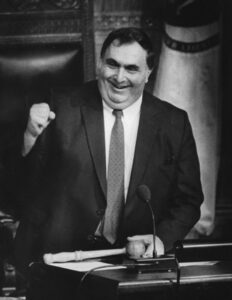 Born in Everett on June 3, 1931, George Keverian was the son of Armenian parents who had immigrated to the U.S. from Turkey in 1915, fleeing a country ravaged by the Armenian Genocide, which saw the mass murder of 1.5 million Armenians at the hands of the Ottoman Empire. His parents, Nazar and Eliza, settled in Everett on Irving Street, in a house that George called home for the entirety of his life.

Shortly after graduating Harvard undergrad, George immersed himself in the world of politics. He successfully ran for the Everett Common Council in 1954, serving four terms, the last of which he was elected as President of the Common Council. Following his fourth term in 1961, George was then elected to the Board of Aldermen in Everett, an office he held until 1967. Setting his sights on the State House, George successfully ran for the Massachusetts House of Representatives 20th Middlesex District seat in 1966.

Beloved and respected among his Beacon Hill colleagues, both for his never-ceasing work ethic and unrivaled sense of humor, George found great success while serving his twenty-four years as State Rep. As a State House politician, he advocated for greater openness in leadership, free speech, and government reform. In 1975, George was elected by his fellow House Representatives to serve as the House Majority Whip, the third-highest leadership position in the Massachusetts House of Representatives. In 1978, Keverian climbed up the ladder yet again, being chosen as the House Majority Leader. In 1985, Keverian reached the top-position in the House, serving as the Speaker of the House until 1991. What made this victory even more notable was that it marked the first and only instance that a successful challenge against an incumbent Speaker was made in Massachusetts, with Keverian unseating Thomas McGee of Lynn.

A lifelong Everett resident, Keverian returned to Everett City Hall, the birthplace of his political career, and was appointed as the City’s Chief Assessor, a role he served from 1995 until 2007. George was given one of the highest honors a City could bestow upon one of its residents, having the Keverian School dedicated to him in 2002 as well as having the Speaker George Keverian Hearing Room, located on the third-floor of Everett City Hall, dedicated in his honor in 2000.

George passed away on March 6, 2009. After receiving the honor of Lying in State at the Massachusetts State House, George was laid to rest at Glenwood Cemetery.

One of Everett’s most giving, humble, intelligent, and personable residents, it is truly an honor to be able to provide a bit of history on Speaker George Keverian.