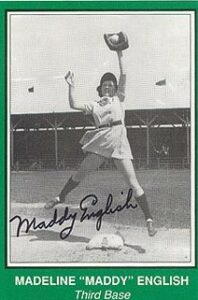 Maddy English was born on February 22, 1925 in Everett Massachusetts. Maddy was the daughter of Ambrose Tobias English, a longtime Everett city official who served as Everett’s Acting Mayor from July 1947-January 1948, and Anne English. While there were no organized interscholastic sports while she attended Everett High School, Maddy involved herself in pickup games around the Boston area, eventually joining a Massachusetts softball team in 1939, who played their home games on the concrete floor of the Boston Garden when the Bruins and Celtics teams were out of town. Her stand-out athleticism at third-base caught the eye of a professional baseball scout, who invited her to a tryout at Wrigley Field in Chicago in 1943.
With the US entangled in World War II, Philip Wrigley, owner of the Wrigley Company and the Chicago Cubs, founded the All-American Girls Professional Baseball League (AAGPBL) in 1943 to keep the public interested in baseball while many MLB teams had their star-rosters depleted due to the draft. Wrigley sent scouts around the US and Canada to find the proper talent to field teams. 280 women were chosen to tryout in Chicago; of them, 60 were chosen to play in the newly founded AAGPBL. Maddy English was one of the athletes chosen and was assigned to the Racine Belles of Wisconsin, one of the four original teams.
Due in large part to her outstanding abilities both on the field and at the plate, Maddy and the Racine Belles won the AAGPBL’s first Championship Title in 1943. In 1946, the AAGPBL put together their first ever All-Star Team, selecting Maddy as their starting third-baseman, an honor she would enjoy again in 1948 and 1949. She is tied for the league record for stolen bases in a single game, posting seven stolen bases in 1947. Maddy played nine seasons with the Racine Belles before ending her professional baseball career in 1951.
Following retirement from professional sports, Maddy served as the player-manager of an all-star softball team in Lynn, Massachusetts for five years. During this time, she earned her Bachelor of Science Degree in education from Boston University in 1957, receiving her Master’s Degree in 1962. Maddy commenced her 27-year career at the Parlin Junior High School in 1960, spending 10 years as a classroom and physical education teacher followed by 17 years as the school’s guidance counselor, advising students on future educational and career paths.
Maddy English has been inducted into the Boston University Athletics Hall of Fame, the Women in Sports Hall of Fame, and the Sports Museum of New England. A permanent display dedicated to the AAGPBL players was introduced in 1988 in the Baseball Hall of Fame and Museum in Cooperstown, NY. Maddy and the rest of her professional counterparts rose greatly in notoriety following the 1992 film, A League of Their Own, starring Geena Davis, Tom Hanks, Madonna, Lori Petty, and Rosie O’Donnell, which focused on the AAGBPL. As a result of the film’s success in bringing professional women’s baseball to the spotlight in America, the National Baseball Hall of Fame hosted an event in 2003 to honor those athletes who made this a reality; in attendance was Maddy English, who gave a speech to an audience of over 200-people, recounting her career as one of the world’s first female professional baseball players.
In 2003, the Madeline English School was dedicated to this trailblazing Everett-native. Maddy passed away on August 21, 2004 in her hometown of Everett at the age of 79.