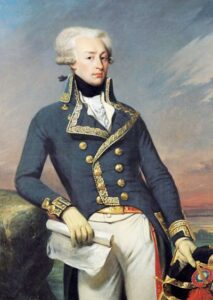 Marie-Joseph Paul Yves Roch Gilbert du Motier, Marquis de La Fayette, better known simply as Lafayette, was born on September 6, 1757 in Chavaniac, France. Born into a wealthy family in Chavaniac, France, Lafayette dedicated his life to seeking glory in what he deemed to be noble military causes. Such a life’s quest was no stranger to Lafayette’s family, a lineage regarded as one of the oldest and most distinguished in all of France. Some notable examples of his bloodline include serving as a companion-at-arms of Joan of Arc’s army during the 1429 Siege of Orleans, acquiring the Crown of Thorns during the Sixth Crusade to recapture Jerusalem in 1229, and serving as the personal horse guard to King Louis XV.

In 1771, at the age of 13, the young and ambitious Lafayette was commissioned an officer, albeit mostly of a ceremonial nature, in the Musketeers in France. Ever the man to experience life beyond his years, Lafayette married Marie Adrienne Francoise at 14. By 19, Lafayette, having already earned the rank of major general, decided that he would set off to the New World to aid America in the American Revolution against the British. Despite disapproval from his father-in-law, even in the face of possible arrest by King Louis XVI, Lafayette purchased the ship Victoire with his own personal wealth and set sail for America, landing in Georgetown, South Carolina on June 13, 1777. Voyaging to Philadelphia, Lafayette made friends with many American greats, including Benjamin Franklin and General George Washington, all of whom were impressed by his enthusiasm and desire to aid the fledgling America in armed combat against the British.

Lafayette’s first battle was on September 11, 1777 at Brandywine. Sustaining a shot to the leg, Lafayette stayed on the battlefield with his troops and helped execute an orderly retreat when outflanked by the British. For putting his men’s fate above his own, Washington recommended that he take command of a division immediately. Entangled in multiple battles throughout the Northeast, Lafayette was consistently commended for his valor and bravery on the battlefield and his unrivaled skill at commanding and motivating his troops.

Returning to France for a year, Lafayette was already hailed as a hero by both the Americans and the French. His loyalty to the American cause was so great, he named his first son Georges Washington Lafayette. Showcasing his return home as a tactical move, Lafayette was able to persuade King Louis XVI to send 6,000 French troops, commanded by Jean-Baptiste de Rochambeau, to America in furtherance of the ongoing struggle for independence from British rule. Unsatisfied with assisting from afar, Lafayette returned to America, landing in Boston on April 27, 1780. Regarded as the last major land battle of the American Revolution, Lafayette and his forces staved off Lord Cornwallis at Yorktown, forcing British surrender.

For his dedication and bravery, Lafayette was regarded as a hero in America and France. He was promoted to marechal de camp, the third in command of the French Army. He was involved in the negotiations of the Treaty of Paris, which officially ended the Revolutionary War and thus recognized America’s independence. Lafayette joined the Society of the Friends of the Blacks in France and advocated for the end of the slave trade and equal rights for free blacks in France and America. Later in life, Lafayette was invited by then-President James Monroe in 1824 to take part in a grand tour of the United States, which lasted 16 months as he visited all 24 states, each to a hero’s welcome.

Marquis de Lafayette passed away on May 20, 1834 in Paris, France at the age of 76. He will always be remembered not only as an outstanding leader, but as one of the world’s greatest unifiers. He was a noble Frenchman with no ties to America, yet commanded troops in New England, the mid-Atlantic, and the South. He was driven by his morals and always stayed true to his core beliefs of what was right, staking his life on multiple occasions to help achieve his goals. Lafayette is the perfect embodiment of the word “hero” and was vital in crafting America’s identity that we hold dear today. You can see his name throughout the U.S., having counties, cities, towns, squares, streets, and schools dedicated in his honor. One such example is found right here in Everett, with the Lafayette School proudly bearing his name.