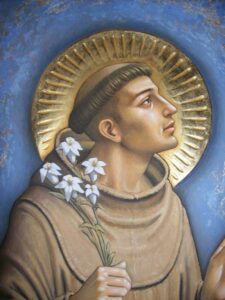 Saint Anthony of Padua, born Fernando Martins de Bulhões, was born on August 15, 1195 in Lisbon, Portugal. His father Vincente Martins and mother Teresa Pais Taveira, raised him in a wealthy, noble family. Given their financial status and their religious views, Anthony’s parents arranged for him to enroll at the local cathedral school. He later transitioned to being educated at the Augustinian community of Canons Regular of the Order of the Holy Cross in Lisbon. However, realizing the importance of education and far too distracted by frequent visits from his family and friends, Anthony transferred to the Monastery of the Holy Cross in Coimbra (the former capital of Portugal) in 1212 to study theology and Latin.

Young Anthony was ordained into the priesthood at the age of 19, being placed in charge of hospitality for the Monastery of the Holy Cross in Coimbra. While there, Anthony met with Franciscan friars and was immediately attracted to their simple, evangelical lifestyle. He sought and was granted permission from his church authorities to leave the Canons Regular and join the Franciscan order. It was then that Anthony actually adopted the name “Anthony”, which he derived from the chapel housed in the hermitage in which he lived.

Anthony was assigned to a Franciscan covenant in Forli, a city in Emilia-Romagna, Northern Italy. Although young and inexperienced, Anthony was charged with delivering sermons. His masterful oration skill coupled with his deep knowledge of Scripture captivated those in attendance. As such, the local minister provincial sent Anthony to the Franciscan provide of Romagna, where he caught the attention of Francis of Assisi, the founder of the Franciscan Order. Francis was so thoroughly impressed with Anthony’s skill and knowledge that, in 1224, Francis entrusted in him the task of educating all Franciscan Friars.

Anthony continued educating and preaching for the next two years, even lecturing at two universities in Southern France. By 1226, Anthony, having returned from France to Italy, was appointed as the Provincial Superior of northern Italy, and chose the City of Padua as his location to oversee. In 1228, now being regarded by many esteemed religious authorities as one of the greatest to deliver sermons, he served as envoy to Pope Gregory IX. After listening to Anthony’s sermons, Pope Gregory IX described Anthony as the “Ark of the Testament.”

Anthony fell ill with ergotism, the result of long-term poisoning derived from the ingestion of fungus. He made the decision to live in a woodland retreat in Padua, Italy, electing to reside in a cell under a walnut tree, alongside two other Franciscan friars. His health rapidly deteriorated, and he died mere months after his diagnosis on June 13, 1231 at the age of 35. On May 30, 1231, Pope Gregory IX canonized Anthony. He is venerated as a Doctor of the Church (a title bestowed upon him by Pope Pius XII in 1946) and as the patron saint for the recovery of lost items, lost people, and lost souls.