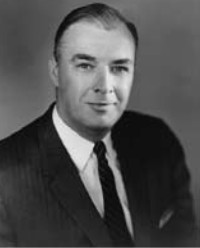 Sumner Gage Whittier was born on July 1st, 1911 in Everett, Massachusetts. Sumner attended Everett High School, Class of 1930. During his high school years, Sumner was very well-rounded student, participating in a multitude of school activities, serving as the Senior Class Vice President, involving himself in school plays, broadcasting, debate team, art club, and serving as the Editor-in-Chief of the Senior class’s Yearbook. Sumner was also a gifted public speaker and writer, engaging in public speaking contests and winning the American Legion Essay contest, two skills that served him well later in life as a politician. Sumner went on to attend and graduate from Boston University in 1936.
Sumner quickly immersed himself into the world of politics, being elected as an Alderman in Everett, followed shortly thereafter by being elected as a City Councilor for the City of Everett. Sumner shifted his political aspirations to Beacon Hill, successfully running for State Representative and later as a State Senator, a position he held for ten years. He did not seek reelection for his State Senator position, opting instead to serve as Lieutenant Governor under Massachusetts’s Governor Christian Herter from 1953-1957. Following Governor Herter’s one-term tenure, Sumner ran as the Republican Candidate for Governor of Massachusetts in 1957, but lost to Democrat Foster Furcolo.
Sumner’s gubernatorial loss did not keep him out of politics for long. In December 1957, he was appointed by President Dwight D. Eisenhower to lead the United States Veterans Affairs, serving as the V.A.’s 5th Administrator in its history. Sumner left this post at the end of President Eisenhower’s term in 1961, transitioning to lead the Supplemental Security Income (SSI) program at the Social Security Administration in Baltimore, Maryland. Ever the dedicated public servant, Sumner served this role until the age of 80, residing in Baltimore for the remainder of his life where he passed away on January 8th, 2010 at the age of 98. One of Everett’s finest, Sumner is laid to rest at the Woodlawn Cemetery.