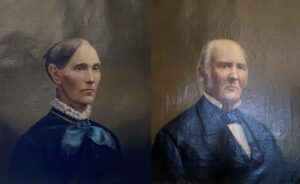 The Shute family traces its history to the early ancestry of Massachusetts. Records show that a Shute house was built before 1700 on land which is in present-day Everett. In 1892, William Shute gifted $10,000 to the City of Everett to build a library in memory of his mother, Tabitha Nichols Shute. After purchasing suitable land from Edward Saunders, hiring a local architect by the name of William Lougee, and having a construction contract awarded to Fessenden & Libby, construction began in 1897 and the Shute Memorial Library was opened to the public on May 24, 1899. In total, the land and the building resulted in a final cost of $11,009.11 (or about $345,000.00 today, adjusting for inflation).

Tabitha Nichols Shute was born on December 26, 1805 in South Malden (present-day Everett). Tabitha lived the entirety of her life in Everett, working as a house cleaner. Tabitha married her husband, Henry Shute, on June 1, 1828, bearing six children, three daughters and three sons. She passed on August 28, 1885.

William Shute was born on May 17, 1831 in Everett, MA, eventually moving to Lynn, MA. He worked throughout his life as a “Morocco Dresser” – Morocco was a type of goat skin leather than was much lighter in weight than the more normal leathers at the time; Dressers were the people who actually tanned and/or softened the leather for the purpose of making them into shoes. In the later 1800s, the City of Lynn positioned themselves as the world capital for leather shoe manufacturing, with its 234 factories churning out over a million pairs of shoes every day.

At the 50th anniversary of the opening of the Shute Memorial Library, the following words were written: “In the United States, the sanctuary of liberty, a natural result of freedom of thought has been the founding of libraries. To preserve the memory of his mother, Tabitha Nichols Shute, a great advocate of freedom, William Shute bequeathed $10,000 to Everett, city of his birth, for the purpose of erecting a library.”

We are forever grateful for the generous gift made by William Shute and constantly strive to uphold the values of Tabitha Shute by providing the necessary tools to ensure that freedom of thought is bestowed to all.